What is “National Strategic Special Zones” ?

April 2013: The idea was proposed at the government’s “Industrial Competitiveness Council” by Prof. Heizo Takenaka.

May 2013: “National Strategic Special Zones Working Group” was formed under the Minister of Internal Affairs and Communications.

August/September 2013: The government solicited proposals by private companies and local governments, and shortlisted 15 items as candidates for the initial list of regulatory reform measures applied in the special zones.

November 5, 2013: The government decided and submitted the “Bill on the National Strategic Special Zones” to the Diet session.

○At the government’s “Industrial Competitiveness Council” on April 2013, the idea was proposed.

◆Purpose: Create the best business environment in the world, first, within the special zones;  then, spread nationwide

◆Revitalize the special zones as showcases for drastic reform of regulations, including so-called “bedrock” regulations and taxes,

○According to the suggestion in the Industrial Competitiveness Council, the government formed “National Strategic Special Zones Working Group” under Minister of Internal Affairs and Communications in May and started designing the new system.

Issues to be discussed;
1) Is the list of regulatory reform measures insufficient, as many newspapers report?
2) Is the framework of the special zones designed well enough to ensure further deregulatory measures to be achieved and proper enforcement of such measures? 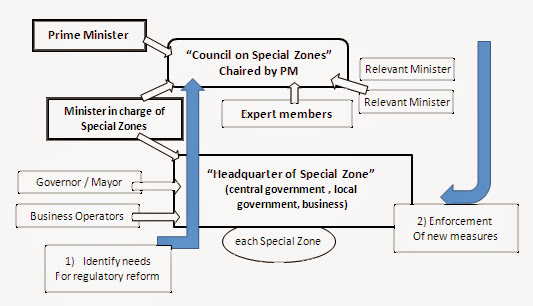